See the sound: how a new technology helped in flaw detection

In December 2020 we introduced a new product based on acoustic holography technology.

By acoustic holography we mean here a method of detecting noise by plotting the intensity of sound. This allows us to identify the directi1on of the sound, the sources of the noise, and visualize color patterns of noise propagation.

So how does this work?

The term “acoustic chamber” first appeared at the end of the 19th century, when physiologist J.R. Ewald used a device to study the function of the inner ear. He realized that the effect of sound waves on the membrane caused standing waves to appear on it in the form of Chladni figures and decided to call the device an acoustic chamber. That’s how the first sound image of an audio signal came about.

Special software processes signals from microphones and cameras in real time and generates an idea of the location of the sound source. And after processing, we get an acoustic picture with sound source localization. This is what we got: 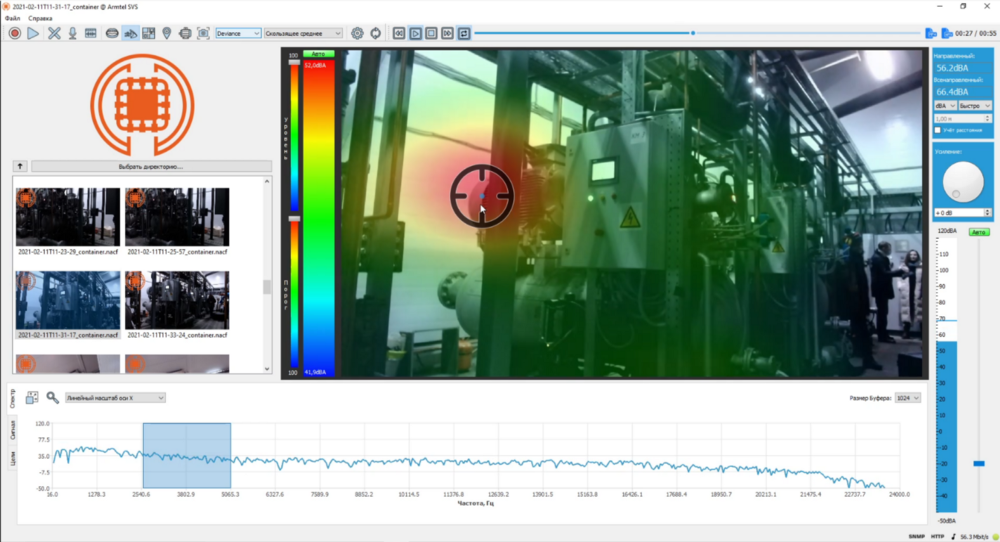 Only 3 actions, but how much use!

(How does the SVS system work?)

The name of this system is the SVS
Sound Vision System
Read more here.

We realized that we can get an acoustic picture and “find” sound. So what next?
We started looking for applications for this technology. We formed hypotheses and started testing them. The first hypothesis was the non-contact diagnostics of the equipment failure. The units at the plants are in operation virtually without stopping, that’s why they have strict requirements for availability.
Detection and precise localization of faults at an early stage before the stage of their active manifestation is the main task.
Without thinking twice, we sent the SVS into action. The first test took place at a steel plant. A decarburizing annealing section was chosen. We examined the unit for abnormalities in operation. To do this, we measured the reference unit and based on the obtained “acoustic impression” we measured the other units.
The analysis of the acoustic patterns showed that there was something wrong with one of the units. We showed the results to the chief engineer and left. Three days later we got a call that during a routine maintenance check, the unit where we found the abnormality had a defective bearing. After that we had our first pilot project.
But we don’t plan to stop there. We understand that we need to identify the specific sound source. For this purpose, we are recruiting a database of sounds for diagnostics and with the help of spectral analysis we plan to identify a specific element.

Next week, we’ll be bringing you the Sound Vision System applications!
Stay with us!